A Day in Barcelona — Big Tippers

Savoring the simple pleasures of a new place or a new experience is what I love most about traveling. After spending seven days on a Mediterranean cruise where we had inundated our senses in seven cities on a non-stop schedule, we were back in Barcelona for two days before returning to the U.S.– whew!

On our last evening, we dined at our favorite Barcelona “side-street” restaurant, enjoyed a scrumptious dinner, and a little more to drink than usual. After all, the half-liter of Sangria was the best value.

We had intentionally used the last of our Euros in bills shopping and sight-seeing during the day, leaving a sack full of coins to pay the restaurant bill.

(The Grans know that math is not our strong-suit. Once in New York with a group of women, when the waiter was “not able to split the tab,” we had worked for an insurmountable amount of time scribbling on napkins, even using our calculators on our phones, before gathering each person’s amount. Hilarity had struck at some point, and figuring out the tip, split four ways, was nearly impossible. We think we left the waiter about 80 percent. I’m sure he appreciated it. )

On this evening in Barcelona, Melanie’s eyes glazed over and she shook her head “no.” I took a deep breath, spread the coins out in neat rows on the table, and began counting.

On about my fourth run through, Melanie lost all REMAINING composure.  Having flashbacks of the New York experience, I couldn’t make eye contact to refrain from falling into the trap of losing it altogether.

After round eight — or nine — I was as sure as I ever would be. I love the fact that European restaurant staff never rush you away from the table. They wait for you to call for the bill in the first place and then don’t check back until you call them back over.

Leaving the neat rows of coins in place for her sake, I asked the waitress to confirm there was enough there to pay the bill and include her tip. She counted the change, nodding and smiling, seeming so appreciative of the near 80 percent tip.

HAVE A LEISURELY DAY

During the day in Barcelona we strolled along the main tourist thoroughfare,  Las Ramblas, people watched, and tried several delicious tapas (Spanish small plates).  Tremendous in size and variety, the food market, La Boqueria, was a perfect place to pick up nuts, fruit, or scrumptious sweets to snack on. There are fresh fish, snails of all sorts and sizes, and butcher shops where one can buy a whole pig or shank of cattle. Since 1836 La Boqueria market has been a mainstay of local and imported culinary products and is a must-visit when in the city. 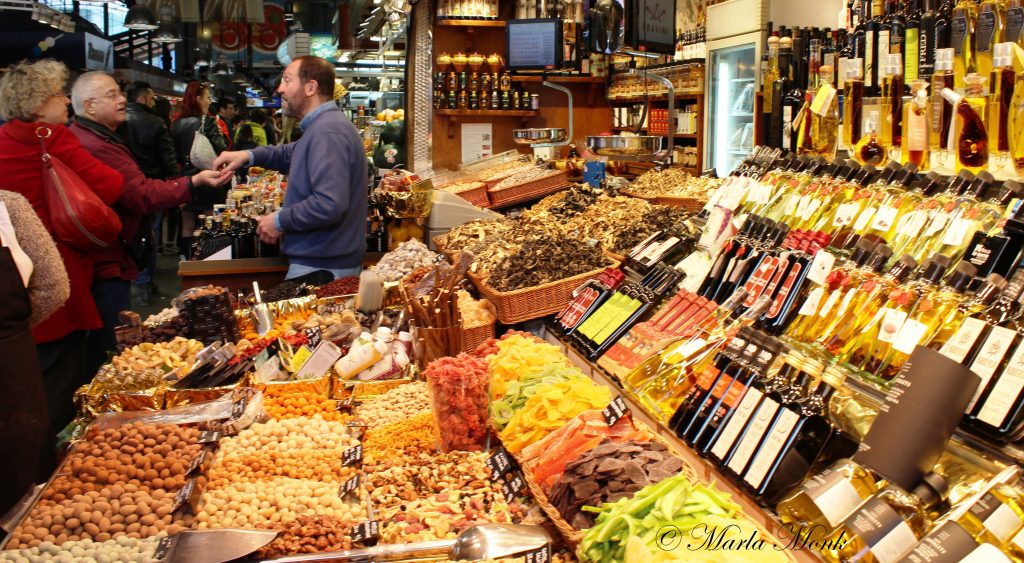 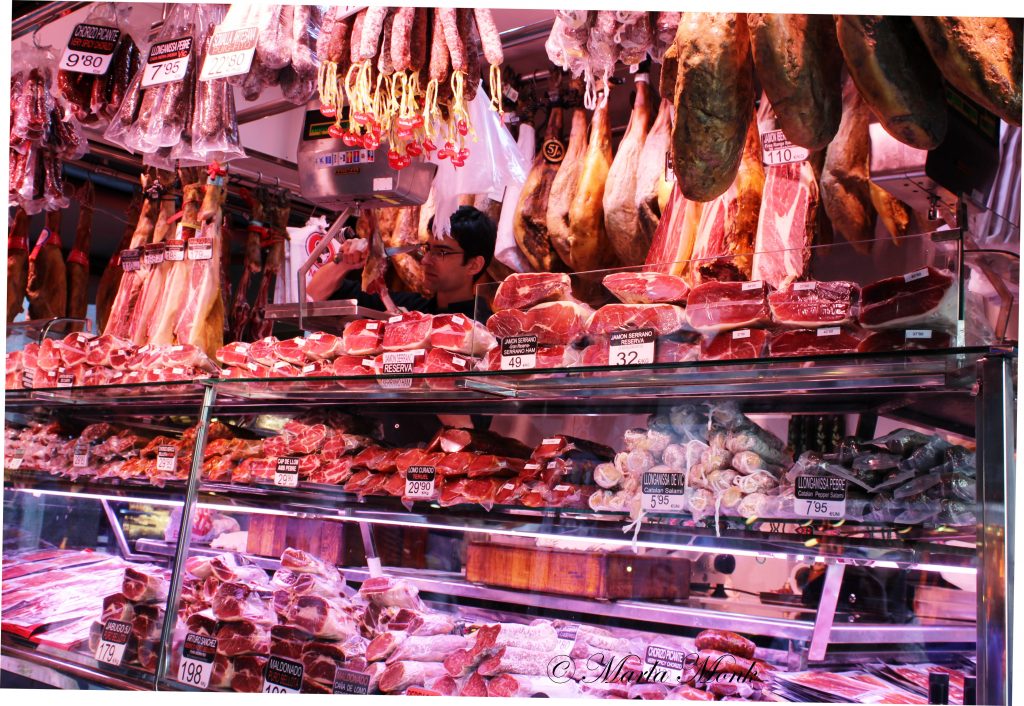 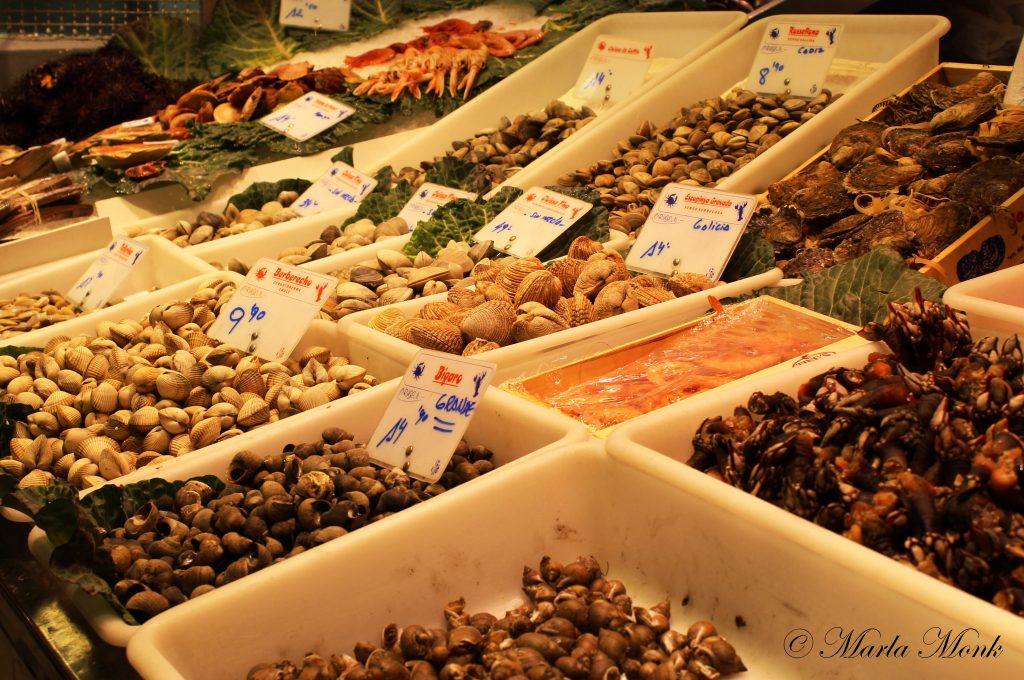 Wandering onto the side streets led us to some unexpected local happenings. In one square with a fountain, a baby grand piano was set up and people were gathering. In a short while, what appeared to be a high school student walked up to the piano, left his backpack on, and sat down on the piano bench. He performed a classical piece of concert excellence. Other students followed suit and played one or two pieces each.  The audience listened or quietly went about their day. 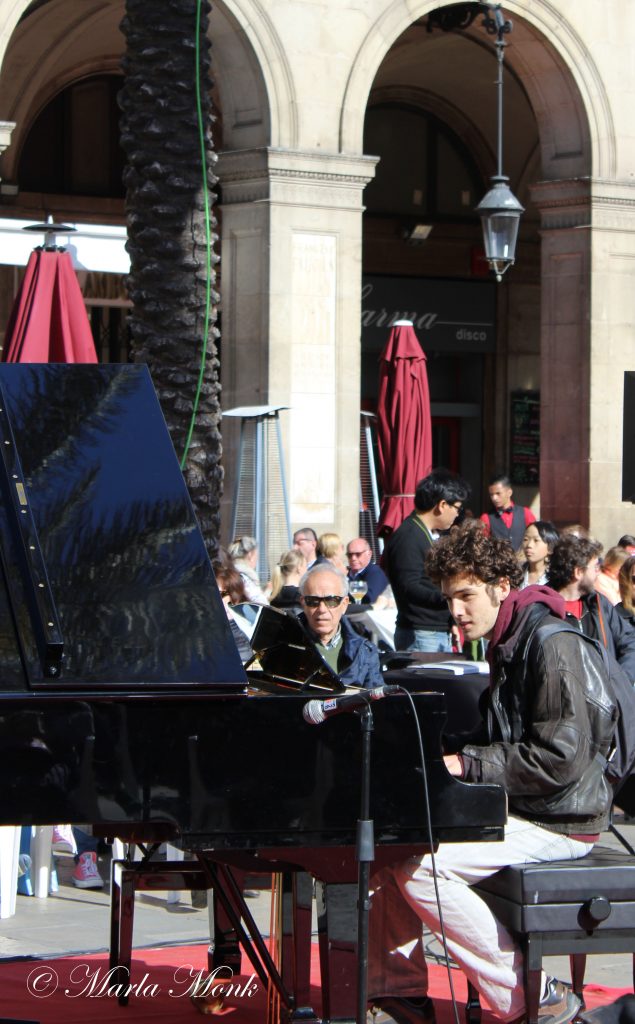 Browsing in boutiques is as relaxed as the dining experiences, with most shop employees there to help but not seeming pushy.  In one minuscule  jewelry shop, the shop owner was also the artist. His unique hand-made items of metal and stones were reasonably priced, and we came away with several one-of-a-kind pieces.

While meandering through the streets, it was fun to catch a glimpse of everyday life. By just glancing up, we saw the daily wash hanging on clothes lines from upper story apartment windows. It gave me the sense of an ancient way of life co-mingling with the hustle-bustle and necessities in a modern city. 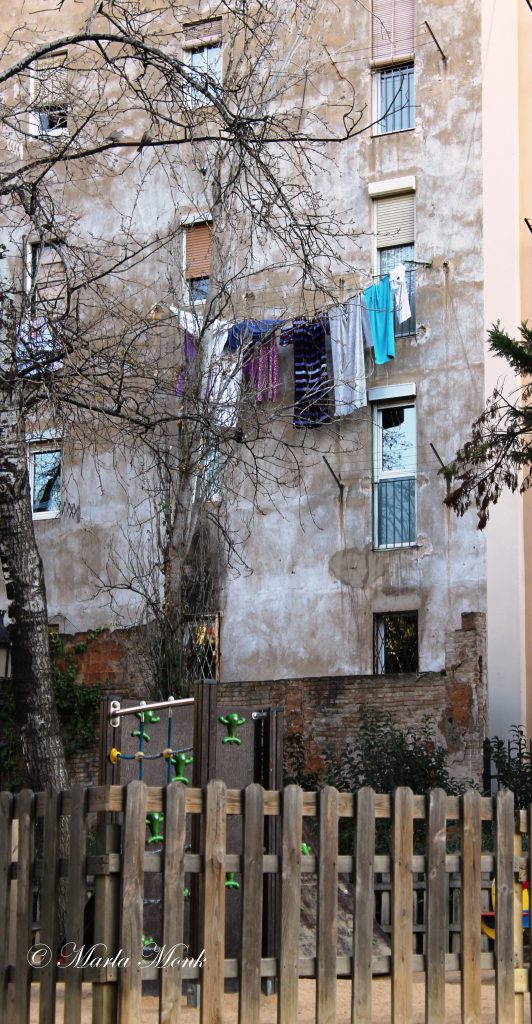 It was magnificent ending our busy, action-packed, Mediterranean tour, with the calm winding down in Barcelona.

At the dinner table that last night, we never noticed other patrons staring at us, or laughing, or pointing at our fiasco. After all, dining out is meant to be enjoyed and not rushed.  We took our last evening’s stroll along the mall of Las Ramblas and said good-bye to Barcelona.