Some of the Veterans were “brothers” since high school. Others served during Vietnam but got to know each other later— through their volunteer work with the prideful Patriot Guard, who provide a motorcycle brigade escort during a veteran’s funeral. On one beautiful spring day in Washington, D.C.  these veterans shared their memories with comrades who know best of the sacrifices made years before.

Having returned  from Washington, D.C., on my second of such trips, I’m full of gratitude and pride for our Veterans who have served in the U.S. Armed Forces. A non-profit organization, Alabama Freedom Flight, provided a day of honor to 99 Veterans. Three were from WWII, 6 from Korea, and 90 from the Vietnam war.  I accompanied the group as a guardian-companion along with 42 volunteers. 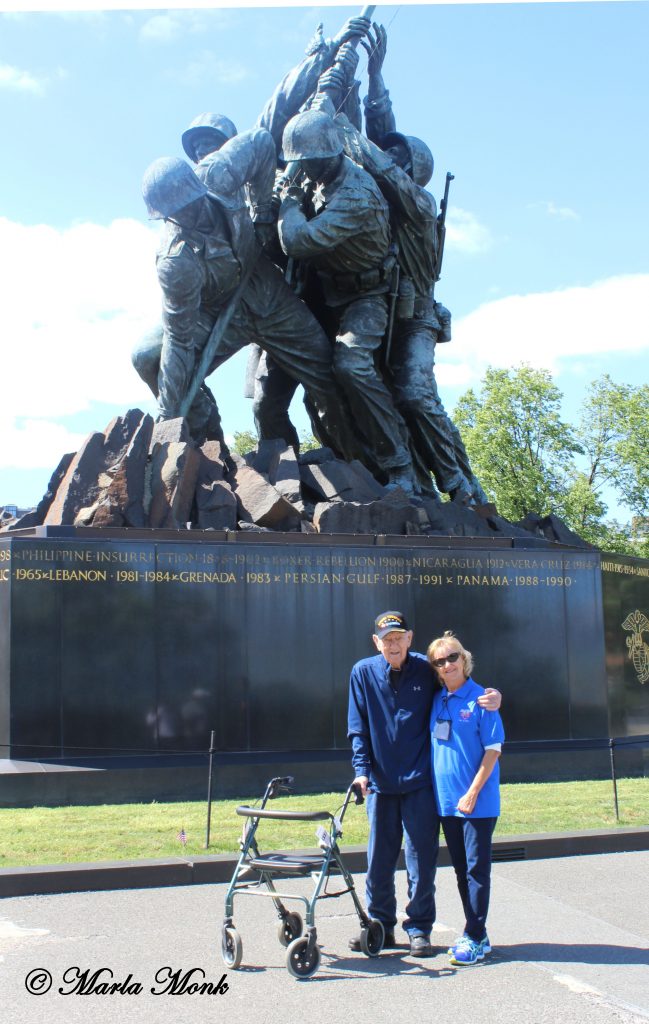 Beginning early in the morning, we traveled by chartered bus to the airport, flew from Birmingham to Washington, where we were greeted at Ronald Reagan Airport by a host of volunteers on the ground. Each Veteran is greeted with a handshake, a greeting of “thank you for your service” and “welcome home.”

Knowing that veterans from the Vietnam era didn’t receive this type reception when they returned from war, the welcome is enough to give you goose bumps and bring tears to your eyes. Many Vietnam veterans remember being treated badly in the days of their return.

I’ll never forget meeting my father at the airport in Mobile on his return from Vietnam. Our tears were of joy then — we were young and unaware of soldiers being treated with disrespect.

As the day in Washington progressed, I believe they all received the thanks and honor they deserved . That is the goal of the organization sponsoring this trip, to be sure each veteran gets to see his or her monument to their service and to be shown appreciation for having served.

Washington volunteers lined the airport, showing the way, waving flags, offering applause. Outside the airport we were taken to chartered buses and provided police escorts who made sure all traffic stopped  as we traveled throughout the city.

If a vehicle didn’t stop or pull over, they were quickly cut off by either the policeman on a motorcycle or in an SUV, often seeming like a near miss collision.

Alabama Senator Doug Jones and Congressman Mike Rogers greeted the veterans at the memorials and extended their thanks for their service. 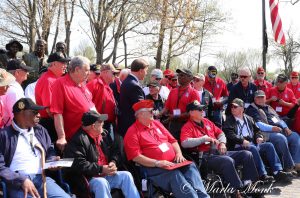 Monuments Visited in A Day:

The day is fast paced in order to ensure all monuments are seen, but the organization of the effort makes it all flow smoothly. Breakfast, lunch, and dinner are worked into the schedule and there is time to talk and get to know one another.

The Veterans talk about their war time to each other, and throughout the day you can observe some working through difficult memories. A group of friends brought paper with their high school’s letterhead  to trace the names of classmates from the Vietnam Wall.

Most prefer to talk to us “civilians” about other things, such as  their families, what they’ve been doing since serving in the Armed Forces, where they’ve lived. Many of these Alabamians are originally from other parts of the U.S., having chosen Alabama as a place to settle.

As a guardian, I accompanied a man who was in the Army Special Forces (Green Beret) and a paratrooper in Vietnam from 1964-1968. When I commented that he must have gone through extensive training, he humbly replied with the line from the song:  “One hundred men will test today.
But only three win the Green Beret”.

He stayed in the Army for 29 years and has lived all over the world. He said the best thing about living in Germany was the close proximity to other countries. He took bus trips on weekends and visited countries all over Europe. 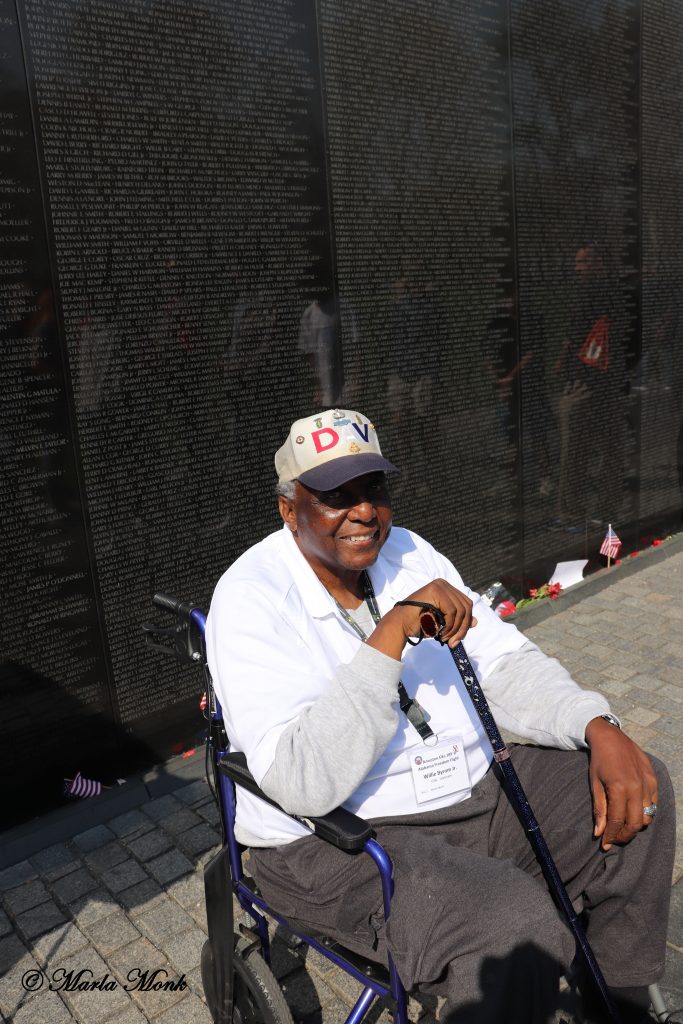 Talking with the honorees is the best part of the trip. One  Navy veteran  had spent so much time stationed in the Philippines that it is now a second home for him . One woman on our flight was one of the first women aviators but was not allowed to serve in combat. She served in a training capacity and is proud to have paved the way for the service women of today. 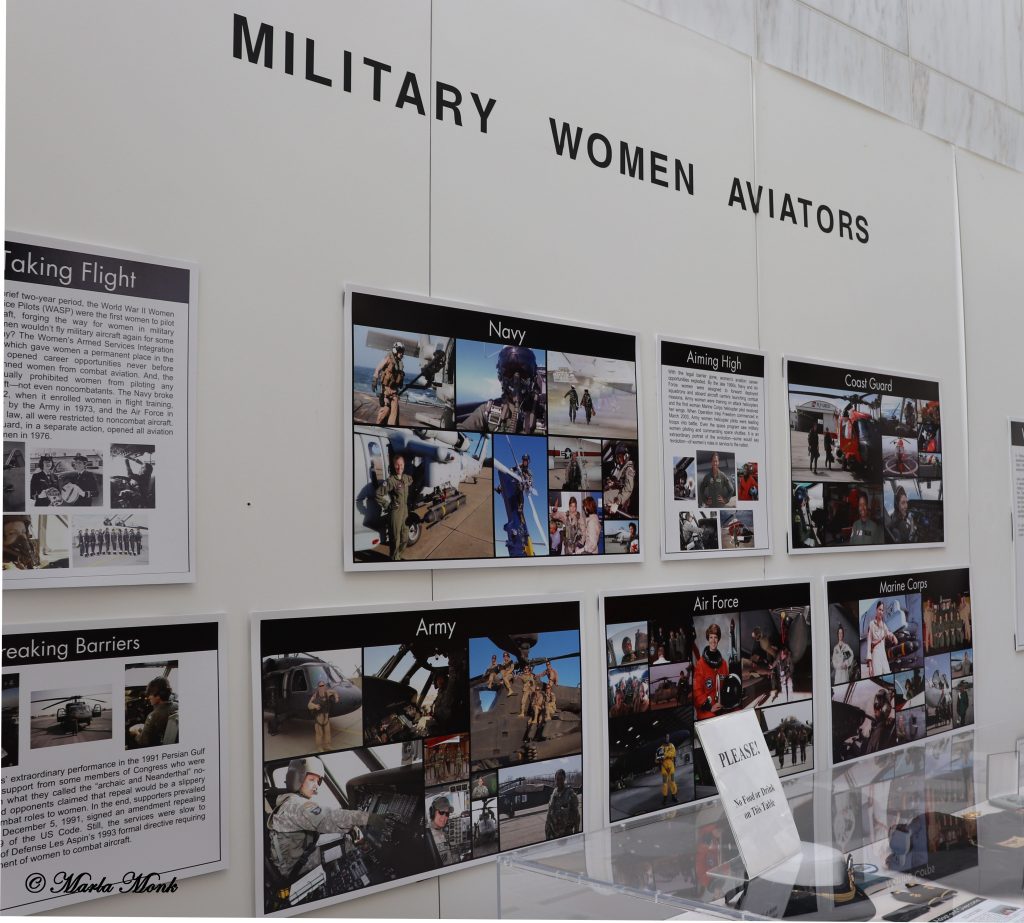 A  large contingent of former Marines were thrilled to see the Iwo Jima statue of the famous flag raising (It had just been reopened after repair).  As they posed for pictures in front, they spontaneously broke out in the Marine Hymn–“From the halls of Montezuma to the shores of Tripoli…”. They sang the entire hymn, and characteristically ended with “Oorah”.

The national Honor Flight Network is a non-profit organization co-founded by two men who are sons of WWII veterans. They recognized that the WWII Veterans were rapidly aging and in 2005 began by escorting a small group of those veterans to view the newly completed World War II Memorial. By 2007 they had formed the official Honor Flight Network and by 2017 the network had expanded to include 140 regional hubs to transport veterans of WWII, Korea, and Vietnam  from all over the U.S.

The purpose of the Honor Flight Network, and subsequent independently established organizations, such as Alabama Freedom Flight, is to honor veterans by taking them to see their memorials, free of cost to the veterans.

It was certainly my honor to be in the company of our country’s veterans for a most memorable day.  Observing them, you get the sense that they are thankful to have returned home from their respective conflicts, some with wounds, but alive. They all know servicemen and women who didn’t return, whose names are not forgotten.

On this Memorial Day Weekend I hope we all think of the sacrifice of those who lost their lives serving in our armed forces– and honor their memory. Thousands have been lost forever and the families left behind know the true meaning of this day.  Thousands still serve, thousands deserve our respect.