Top things to do on Jekyll Island

Ahh…the heroines of Victorian novels had it made. They lounged all day and were waited upon as they read poetry while overlooking the family’s sprawling estate. Power was in the wealth they inherited, and they were beloved by all. Don’t we all dream of such a time?

Imagine stepping back in time to the Victorian Era, 1886, to a place of unspoiled beaches, multitudes of deer, quail, pheasant, and turkey roaming about, and long leisurely days in the sun. You can still get a similar feeling today when you drive up to Jekyll Island Club Resort, a historic hotel — without so many of the wild animals. http://Jekyllclub.com

Jekyll Island was purchased by the wealthy elite of this country in the late 1800s for their winter hunting camp/playground. The Rockefellers, Morgans, Vanderbilts, and others came to Jekyll to escape the harsh winters of the north and spend time with their families on this wild island off the coast of Georgia, halfway between Jacksonville, Florida, and Savannah, Georgia. The island became what was known as the richest, most inaccessible club in the world. Even the Carnegies were turned away for membership, rumored because they came from Scotland as penniless teenagers before making their fortune. The Carnegies purchased their own island (see http://Cumberland Island – Wild Horses and Wild Women)

The entire island of Jekyll is now a state park, in which you pay your entrance fee before ever driving on the island. Unlike the surrounding islands of Amelia and St. Simons Islands, Jekyll still has a very natural feel to it, as there is a 65/35 rule in place, where 65 percent of the land must remain undeveloped.

Jekyll Island makes the perfect destination for a girlfriend getaway, escaping family life and job responsibilities for just a little while.  We watched couples enjoying their day together here as well.

Take a tour of this historic district through the Jekyll Island Tours and Gift Shop Office.  The Rockefeller Experience Tour, along with the Faith Chapel Tour, are just two of the tours offered by the tour center.

The Passport to the Century Tour takes you on a narrated, open-air tram ride around the property and into two large homes (they call them cottages) built in the 1800s, with a visit also to Faith Chapel. We visited Moss Cottage, whose past owners were William Strothers and George Henry Macy, president of Union Pacific Tea, which was later A&P.

Stay at the historic hotel

The valet met us promptly for a complimentary park. The guests on the lawn were all dressed in white, playing crochet, while they sipped iced tea and mint juleps. We were immediately swept back in time.

Our room was a Clubhouse Deluxe Double Queen Suite with a separate living room.  The front desk texted as soon as we entered our room to make sure our accommodations were perfect and to see if we needed anything.  We found everything just to our liking and the beds to be extra comfortable.  There were coffee and a mini-refrigerator, along with very nice toiletries and soaps. 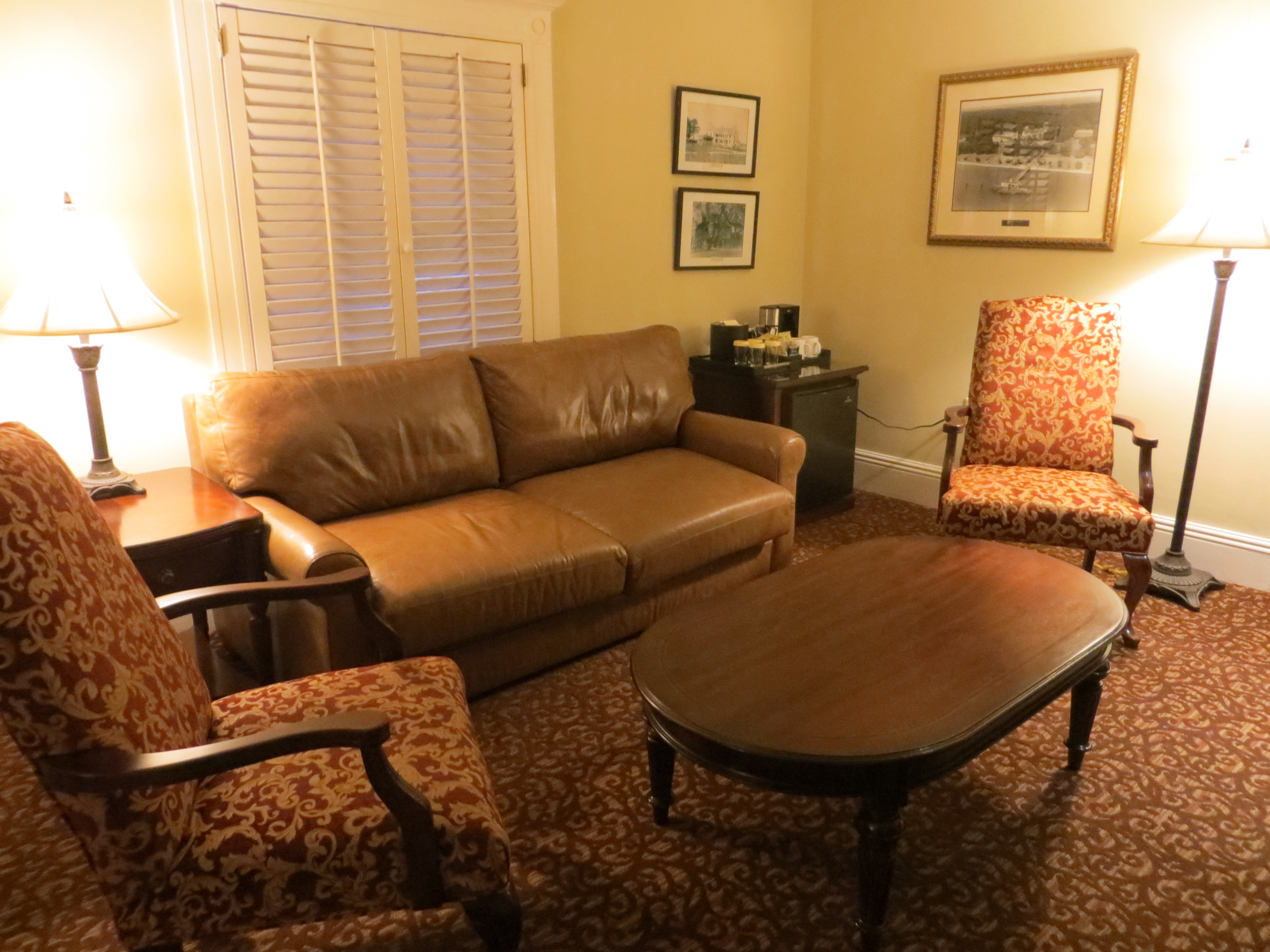 Bicycle or walk around the island on the bike trails

The bicycle trails are so inviting as you ride along the coasts and among huge live oak trees that shade you while you pedal through the ocean breezes. Cruise around on the 23 miles of trails, which include five different trails, 2 miles of Ocean Views, 3.5 miles of Glimpses of Golf Courses, 4.6 miles of Historic District, 8.5 miles of North Loop, mostly along the coast, and 6.2 miles of the South Loop. There are three places on the island to rent bicycles and tricycles of all types, including two- and four-person bikes. Download a map at http://Jekyllisland.com

Driftwood Beach, at the northern shore, is the perfect place for your family beach photos. Huge trees and branches are washed onto the shore at this tree graveyard. Constant erosion of the beach creates a landscape of preserved, fallen trees. I can see that my grandchildren would love playing on this natural playground. I had to climb a few trees myself.

It’s no wonder that portions of “The Walking Dead” were filmed here. I found myself looking around the largest trees just to make sure no zombies were left behind. 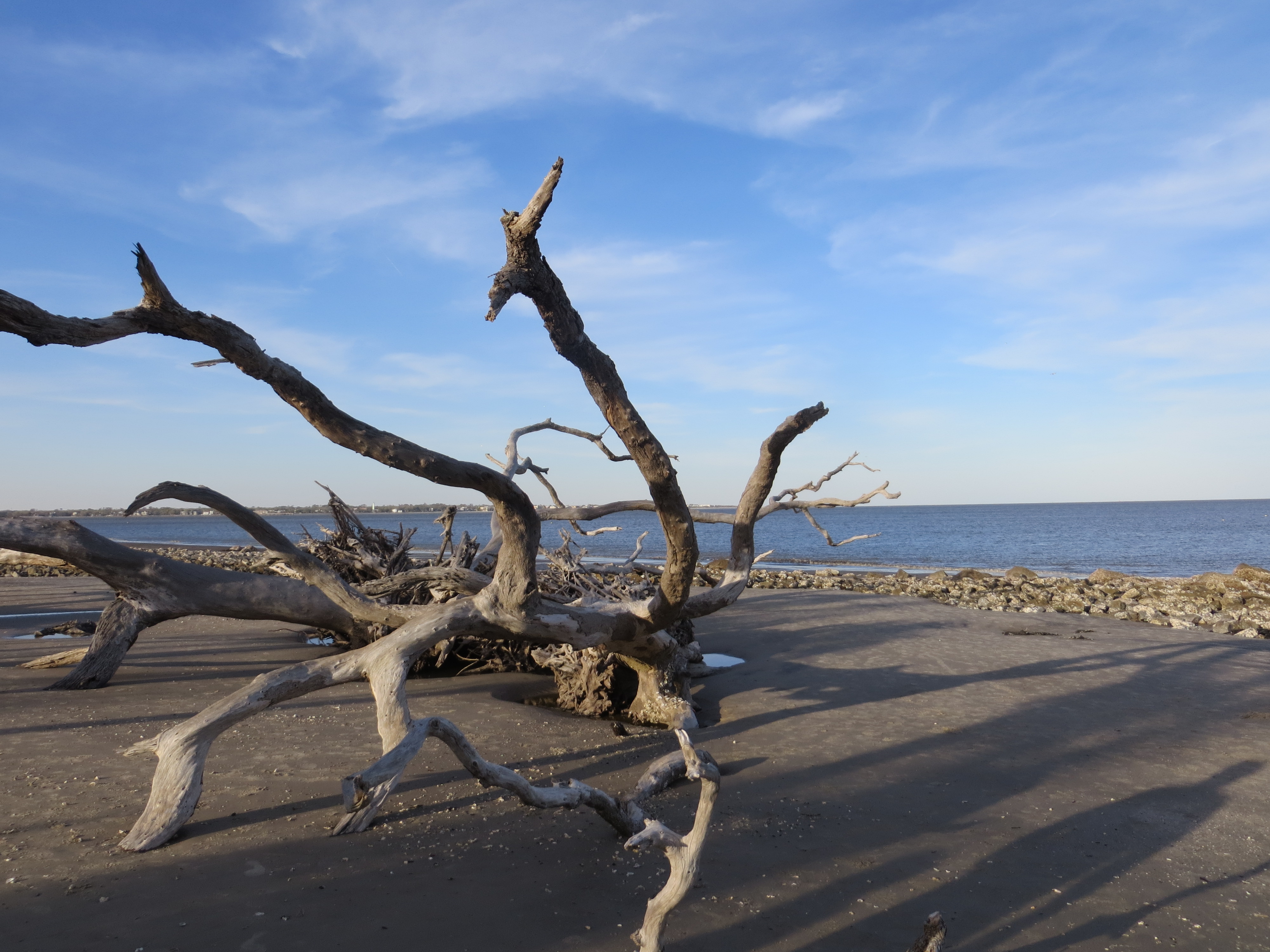 Spend a morning or afternoon at the Georgia Sea Turtle Center

The Georgia Sea Turtle Center is located close to the hotel in this historic district. Five of the world’s seven sea turtles are found off the coast of Georgia: loggerhead, green, leatherback, Kemp’s ridley, and hawksbill. Sea turtles face threats including entanglement in or ingestion of plastics, collisions with boat propellers, accidental drowning in shrimp and fishing nets, poaching and habitat destruction.

The volunteers at the center were well-informed and enthusiastic. They approached us and informed us all about the schedule for the day with feedings and informative talks available. We curiously watched through the extra-large viewing window as the veterinarians treated a sick turtle. Don’t miss the separate building in the back which houses the larger turtles in swimming pools for rehabilitation. This would be a fun, educational stop to bring kids and grandkids. Anything you ever wanted to know about sea turtles you can learn here. 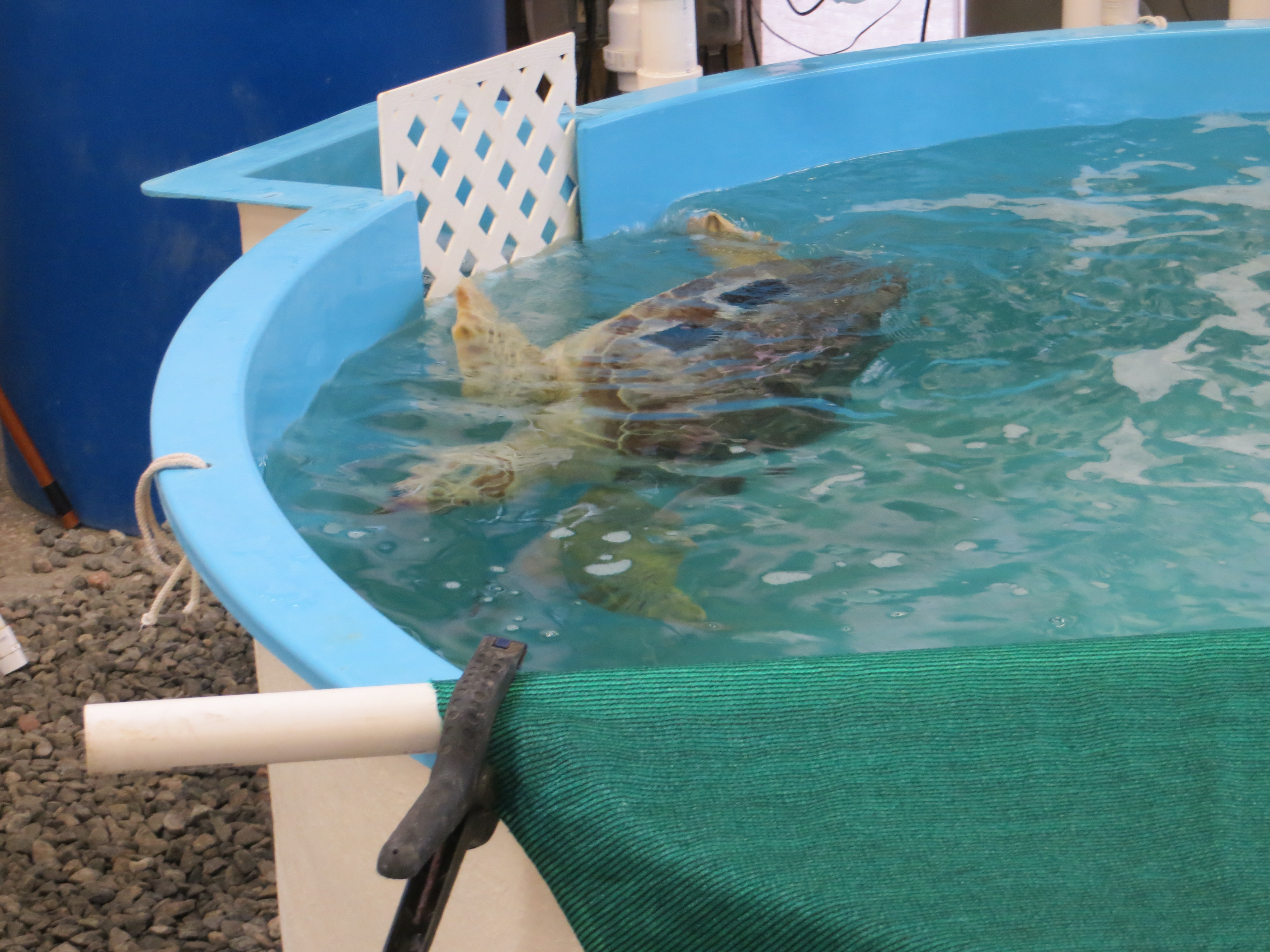 Volunteers work tirelessly during turtle nesting season, late-May to mid-August, to rescue hurt turtles and others in need and bring hatchlings into the center for treatment. They receive their funding strictly from donations and sales at the gift shop. The center is open from 9 am until 5 pm, and the cost of the center is $8 for adults, $7 for seniors, $6 for children 4-12. Children under three are free.

Visit the other beaches on the island

Great Dunes Beach, South Dunes Beach, and St. Andrews Beach are all very popular. Each one offers a different view. St. Andrews is popular for dolphin and bird watching. The giant dunes on Jekyll, much larger than our Alabama gulf beach dunes, offer the island protection from storms. Beaches that offer shade are my favorites. And these beaches don’t offer just any shade, but the shade of a giant live oak with Spanish Moss dripping from it. 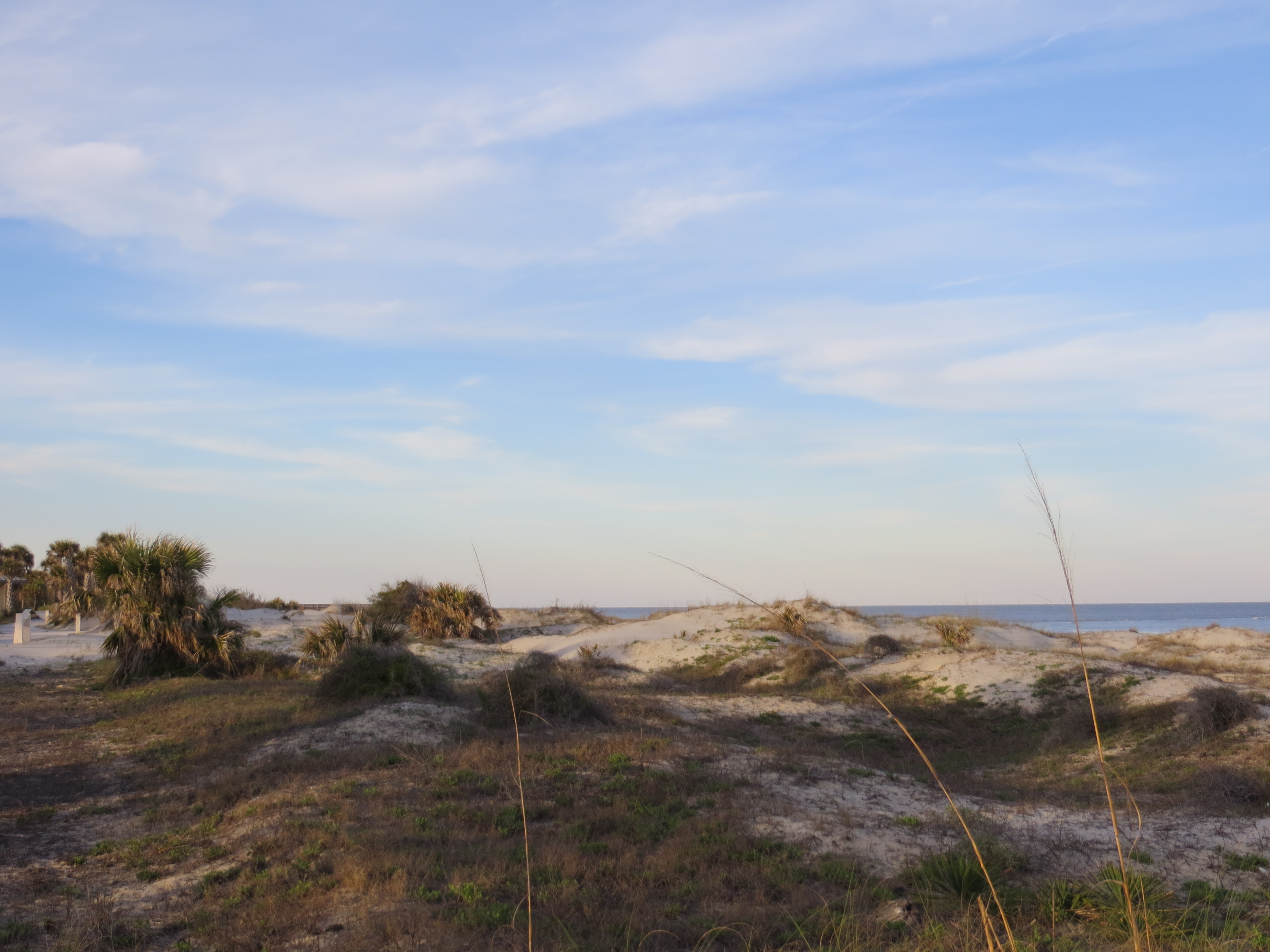 Dine in the Grand Dining Room

Dinner at the Grand Dining Room is relaxing and peaceful. The piano man gently plays the ivories to sweet melodies while you dine. Sit close to the inviting fireplace amongst white tablecloths and waiters hustling to meet your needs. They offer breakfast, dinner, an award-winning Sunday brunch, as well as Victorian tea on Friday and Saturday at 4 pm. 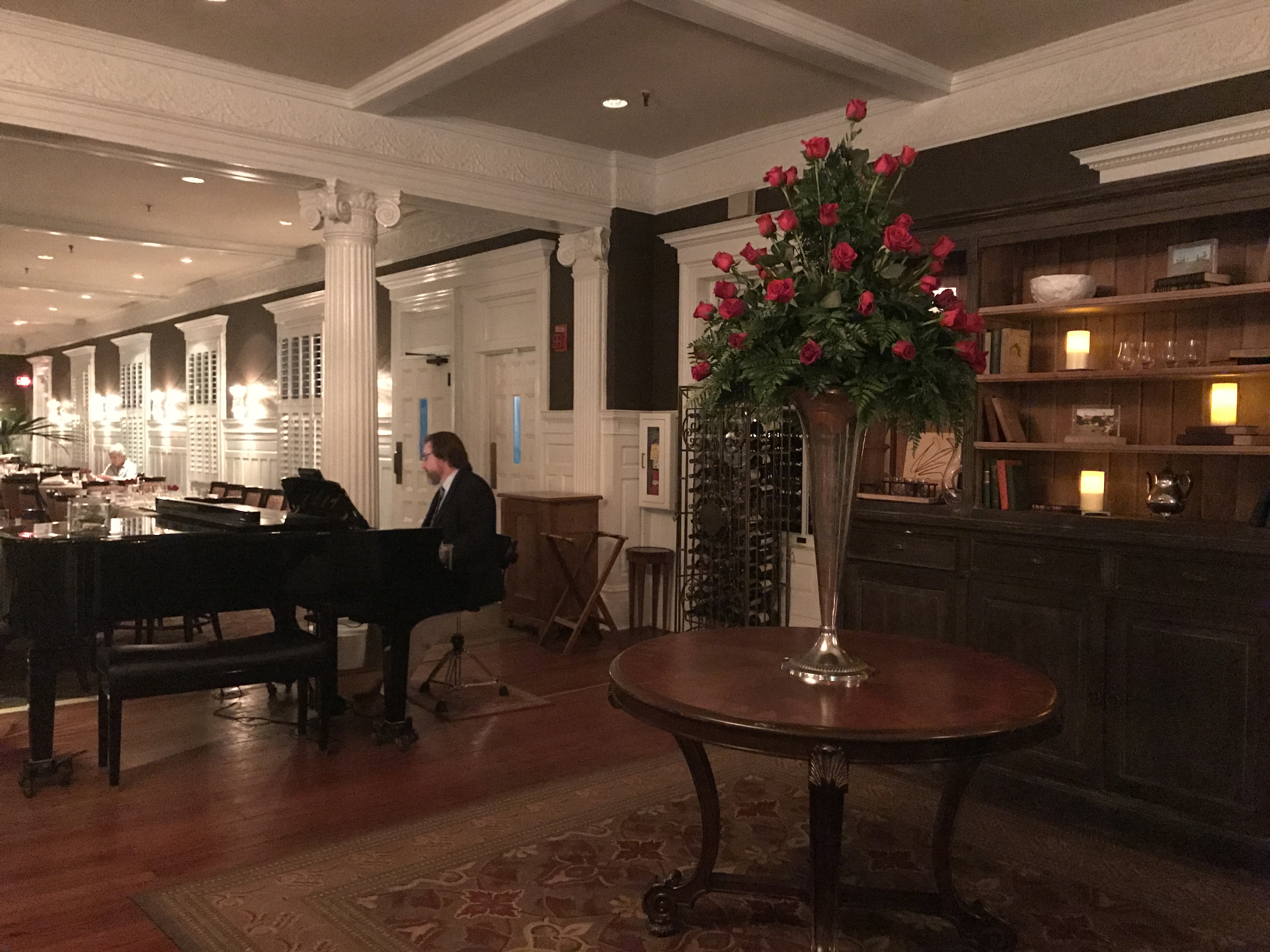 The scallops were melt-in-your-mouth delicious, and the shrimp and grits were exceptional.

Dine at The Wharf Restaurant

The Wharf is the more casual resort restaurant, just a short walk from the hotel. It is located on the bay side of the island.

As we browsed their impressive menu, we hurriedly ordered our Mint Juleps to join in the spirit of the day. We savored our drinks while watching the boats going by and the activity along the shores of the bay.

The crab cakes were especially meaty and delicious, and the fish tacos were also fresh and tasty.

So travel back in time to Jekyll Island. Enjoy a Victorian-age vacation with your family and friends, and live like the wealthy elite of early America for just a little while. I can attest to its beauty and its ability to transcend time.